Desserts and Puddings, The Great British Bake Off

Last Sunday I woke up feeling absolutely shattered but keen to get back into my kitchen.  I had been away on holiday for a week and although we had all had a fabulous time, eaten loads of lovely food and lazed around by the pool I was pleased to be back around my home comforts.  I really miss my own kitchen at home with all my bits and pieces and I never thought I would say this but I was even glad to use my own kettle!  The villa we rented up in the hills overlooking San Antonio was brilliant but it didn’t have a kettle!  The villa keyholder told us there was a kettle you put on the stove but we couldn’t find it, so we spent the week boiling pans of water for our morning cups of coffee!  So, the first thing we did when we got back in on Saturday afternoon was to have a cup of nice strong Yorkshire tea!

When I got home I also realised I was itching to bake.  When I go abroad especially to places like Ibiza cake is usually the last thing on my mind because it’s too hot, but when I’m holidaying in the UK I stuff myself silly with the stuff.  Perhaps I ought to move to a hot country then I would weigh a lot less!

My hubby went off on a lad’s racing day out to watch a hill climb event at Oliver’s Mount in Scarborough. I was left at home finishing off the washing and ironing and getting a Sunday roast ready for 5pm when he got back.  I thought, then that my first baking session ought to be something easy that would use up leftover fruit and be quick to make.

I looked in one of the trusty Great British Bake Off books and found in the second book that there was a recipe for Peach and Ginger Cobbler.  Oh bum, I thought. We didn’t have peaches at home, just a bowlful of pears and apples. I had had to leave nearly a full punnet of peaches behind in Ibiza as I just couldn’t carry them home with me, so frustrating.  When I mentioned peaches to my 12 year old son, he said “Erggh, gross!” so I had to think of something else.   I had tried a cake once with pear and ginger together and wondered if that would work in the cobbler instead of the peaches.  You can but try I suppose!

So, I set to with getting the meal prepared.  The roast pork joint had just gone in the oven with a prayer that the crackling would come out right, I had peeled the veg so now it was time to deal with the fruit.  I peeled and cored five large pears, then sliced them in half. These were cooked slowly in the oven with water and sugar for about 30 minutes.  I then made the cobbler topping which was quite messy as it involved using quite a lot of natural yoghurt in the mix.  The real treat was adding tiny cubes of stem ginger to the dough.  Finally, when the dough was formed I made 8 equal sized balls and placed them around the top of the baking dish. 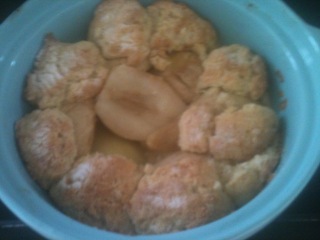 The cobbler baked in the oven for approximately another 20-30 minutes.  I had to take it out of the oven and reheat it through gently as it was ready about an hour before my hubby got home and I needed the oven space for my roast potatoes and Yorkshire puddings!

The verdict was that the fruit could have done with slightly longer to be baked in the oven as the pears were still quite hard in places.  This is what happens when you try to do several things at once like I try to.  My hubby and I enjoyed the cobbler but the children didn’t.  They kept joking about ” a load of old cobblers” and my son said he liked the custard best. And no it wasn’t homemade, it was a carton of Ambrosia lurking in the back of my cupboard that needed using up?

Would I make it again? Yes I will but hopefully if I make it with pears again I will make sure no one breaks their teeth on them!