I go in fits and starts with my blog posts. Sometimes I have loads of time to write things up and take photos, other times I don’t have time to even think about it.  Over the past week it’s been the same and I realised I had seven recipes to blog about linked in with my Cooking The Books Challenge for this month.  For those of you that don’t know, I’m attempting this month to bake one recipe from each chapter of Mary Berry’s Baking Bible.  This is easier said than done as the Baking Bible has about 250 recipes and 19 chapters!  At the beginning of April what with me having 2 weeks off for the Easter Holidays and for Easter itself I thought I would have it covered.  Oh no!  It’s the end of April tomorrow and I have two recipes I won’t get round to baking: the Banoffi Pie and the Marbled Chocolate Cake.  At least I managed 17 out of 19, that is some achievement and I am proud of that.

So I’m going to share pics of the bakes I never got round to blogging about and as from now I’ll try to keep up!  So here goes:

First up is Mary Berry’s Simnel Cake which I baked for Easter Sunday.  It tasted absolutely divine and had a delicate spice flavour to it.  I loved Mary’s recipe and so far out of all the Simnel Cake recipes I have tried I have found this by far to be the tastiest as well as the easiest for me. 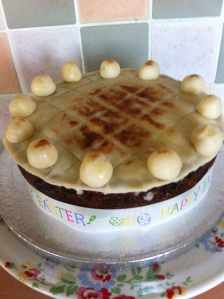 Last Sunday I baked Mary’s Hazelnut Meringue Cake for our Sunday lunch pudding.  Both my children hate anything with nuts in it but they devoured this.  I really enjoyed baking this dessert and I think I will bake it again and again.  I would love to try it with pistachios and strawberries in over the summer, they sound like a delicious combination. 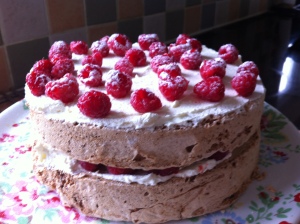 Now for one of my baking flops!  I have never ever made choux pastry before and it shows!  I wanted to bake Mary Berry’s Chocolate Eclairs last Saturday but they were a complete disaster from start to finish.  First the mixture was far too runny so it poured out through the piping bag straight onto the trays like a flood!  I tried again but this time I gave up the idea of piping eclairs and did great big mounds.  Of course they didn’t puff up like I wanted them to and looked like frisbees!  By this time I couldn’t give a stuff and filled and decorated them anyway.  Although they looked awful, can you imagine what would have happened if I’d have been on The Great British Bake Off with those monstrosities? But not to worry, my family wolfed them down anyway!

My daughter was asked to bake some buns for her dance class bake sale, so she baked Mary’s Butterfly Buns for her contribution.  I originally was going to bake them myself but she asked if she could do them instead.  I thought she did a marvellous job.  I think butterfly buns are so cute and I’m sure they went down well.

I made Mary Berry’s Borrowdale Teabread to go in the freezer as we didn’t need it there and then but might in a few weeks time.  I should have baked one big tea bread instead of two small ones as they don’t look very attractive.  Still, I’m looking forward to a slice with butter or served with cheese sometime soon! 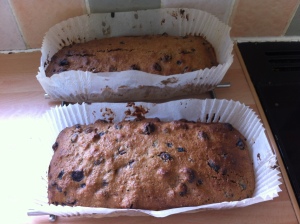 All the family loved the pudding I made for the Easter weekend.  It was an Austrian  Baked Cheesecake but instead of curd cheese I used ricotta.  My son finds creamy American style cheesecakes far too rich but this was sweet without being  too heavy, claggy and overpowering.  I really enjoyed it and had to use all my willpower to stop myself eating the leftovers! 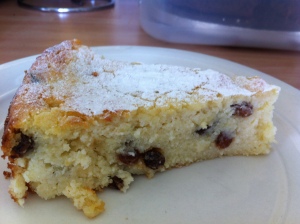 At work we had a training day for the first day of term so I took in some of my first ever attempt at Millionaire’s Shortbread from the Baking Bible.  I find it a bit rich and sickly so I don’t often eat it.  I need a bit of practice in getting the neatness on the top but it did taste lovely.

On the Easter Weekend I baked a large Cheese Scone Round to go with a bowl of tomato soup.  It was heaven and went down very well with the whole family.  I think I’ll be baking this again and again as it was so quick to make and tasted fab.

Two weeks ago during the Easter holidays my mum came to stay.  On the Saturday night I chose to bake Mary’s Caramelised Onion and Balsamic Foccacia Bread to go with antipasti meat, olives and cheese.  When I was kneading the dough earlier that day my son came into the kitchen and asked “What’s that?” When I told him what it was and that it was for our tea he said “I’m not eating that Italian shite!”  That’s teenagers for you!  Anyway, he ate two pieces of the bread so it can’t have been “shite!” The rest of us enjoyed it too, though it reminded me more of pizza dough than foccacia. 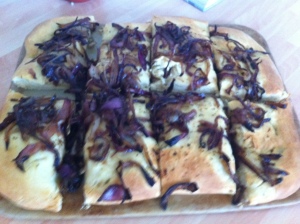 I have really enjoyed this month’s challenge and baking more recipes from one of my favourite cooks.   There are still loads more recipes I would like to try but now is the time to move onto a fresh challenge for next month.

Like Loading…
← Cherry and Almond Traybake from Mary Berry’s Baking Bible.
→ Cooking The Books- The Brand New Challenge for May 2014.