I love making pies, quiches and tarts but I always worry about the fat and calorie content in the pastry and the fillings.  But nothing beats a homemade pie or tart, especially on a cold Winter’s evening.

I had planned out the meals to cook for this last week but forgot I was a day behind with what needed eating up first in the fridge.  I had some chicken breasts which needed to be used so they ended up being cooked for Thursday night’s dinner.  Being a supply teacher and at the time having no work booked in for the day after, I thought I’d prep ahead just in case I ended up working.  We’d all be starving by the time I got in from work. Not only that but the last thing I’d want to do is to start cooking something from scratch.  I’m glad I was prepared.  I ended up working and didn’t get home until 6.15pm.

The Caramelised Onion and Stilton Tart from The Great British Bake Off Christmas book ended up being our dinner along with some new potatoes, peas and sweetcorn.  It was assembled and cooked the night before and it was reheated carefully the following night.

So, back to Thursday tea time and I’m cooking two meals one after the other.  I started off with the tart and then went on to cooking the chicken breasts in a chipotle marinade with new potatoes, peas and sweetcorn.  Yes I know we had that two nights running but it was what I was trying to use up in the fridge before doing my weekly shop at the weekend.  I began with making up the shortcrust pastry which was fine.  It was chilled in the fridge for half an hour as I was cooking three medium onions in some olive oil and butter. The long, slow and low heat of cooking the onions really helps them to caramelise.

When the pastry was chilled for long enough, I got it out of the fridge and rolled it out to fit it into my tart tin.  There was enough pastry to overhang the edges. I filled the pastry case with baking parchment and my ceramic baking beans so I could blind bake it.  After 12 minutes I had to remove the paper and the beans then pop the pastry case back in the oven for another 5 minutes.

As the pastry case was baking, I mixed together the filling.  I mixed together two eggs and another egg yolk, along with some double cream, some grated Parmesan Cheese and some crumbled Stilton.  I was also meant to add pine nuts to the mixture but when I looked in the cupboard I’m sure I couldn’t find any.  So I left them out altogether.  I’m sure walnuts would have gone well in the tart as well.

When the pastry case came out of the oven, I mixed the filling, along with the caramelised onions together. The mixture was poured into the case and I popped the tart back into the oven.  I always put the tart case onto a flat baking tray in case it leaked out all over the oven floor. 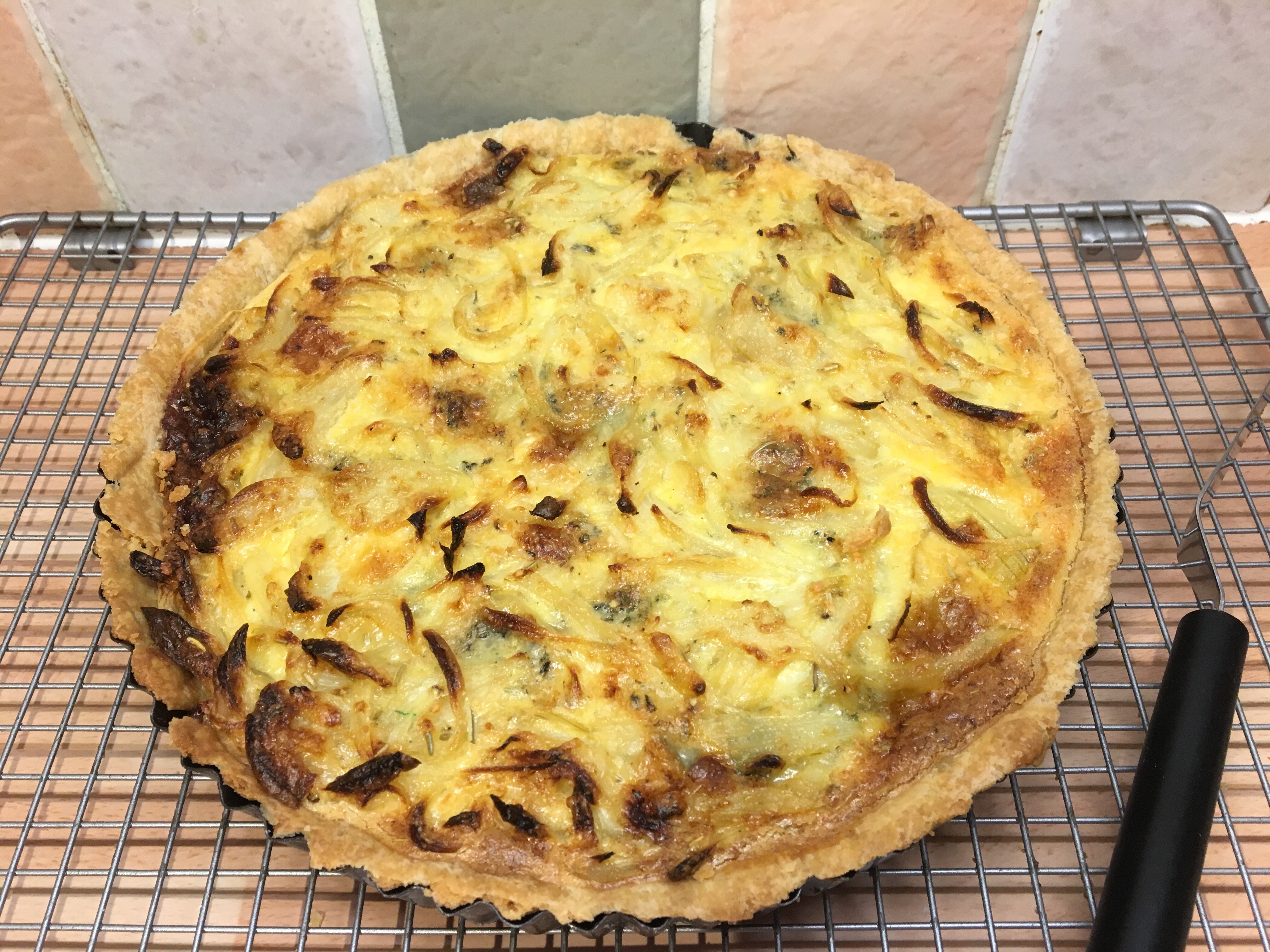 The following day, when we chose to eat the tart, I asked Mr SmartCookieSam to put it back in the oven to reheat through for half an hour.  The result was absolutely delicious.  I’m sure it was hugely calorific, what with all the cheese and cream in the filling not to mention the butter in the pastry as well.  But it simply melted in the mouth.  What’s more is that as the tart was so big there was enough left over to eat cold the next day for lunch. It was a big hit and a recipe I’ll definitely be making again.