I’ve been so excited for the Great British Bake Off. It’s exciting every year but this year it’s been more welcomed as something special and comforting in these difficult times. At one stage I was wondering if it would make it onto our screens this year. Baking has helped a lot of us through difficult times and this is especially so where people who have never baked before have taken to the kitchen to help get them through. I’ve always seen baking as a form of therapy for me. It helped me with the black hole I got myself into when my younger child started school and my teaching career had been put on hold. Now baking helps me relax on my day off from being a nursery nurse or a supply teacher.

Week one on Bake Off usually is cake week and it’s always great to see what challenges have been set. The first signature bake was a Battenburg Cake. I do like Battenburg but am more familiar with buying Mr Kipling than making them. To me, they are very fiddly but I do love a bit of marzipan. Battenburgs remind me of my Great Grandma, my Nana Lilian. We used to visit Nana and she would do a traditional Sunday tea with ham sandwiches, Battenburgs and fruit cake. Her Battenburg was bought from a local shop though and she told me that my Dad used to call it Window Cake when he was little.

I wanted to have a go at joining in #GBBOTwitterBakeAlong this week so I got prepared to make a Battenburg. The bakers on GBBO had chosen various complimentary flavours but I stuck with traditional. Years ago I had a go at baking another GBBO recipe, Mary Berry’s coffee and walnut Battenburg but when I was talking with my daughter about flavours she said just make a normal one. The one flavour was delicately flavoured with almond to compliment the marzipan but coloured pink for half of it.

On the Bake Off I noticed that some bakers were using the Alan Silverwood aluminium Battenburg tin. I have this tin, although in the last 10 years I’ve only used it twice! It is such a cute little tin and if you take the dividing sections out, it’s also been great for mini traybakes!

After a busy morning catching up, including going to get my hair cut, I was determined to have an afternoon in the kitchen. Out came the ingredients I needed: butter, caster sugar, eggs, self raising flour, almond extract, pink gel food colouring, as well as apricot jam and some marzipan.

After greasing the tin and preheating the oven, I creamed together the butter and sugar until it was light and fluffy. Then I added in the eggs, beating after each addition. When this was done, I put in some almond extract, followed by self raising flour.

I split the cake batter into two bowls. One was left plain and the other was coloured with pink food colouring gel. Then I put the batter into the prepared tin. This was quite fiddly as the sections of the tin are quite narrow. I think using a teaspoon was the best way.

The Battenburg baked in my fan oven for 25 minutes or so. I left it to cool on a wire rack for a while until it was cool enough to take out of the tin.

Once the four sections came out of the tin (thankfully in one piece), I trimmed them so that they were flat and also the same size.

Then it was time to assemble the pieces together. Using sieved apricot jam, I brushed it onto the pieces and stuck them together to create that iconic Battenburg window shape. 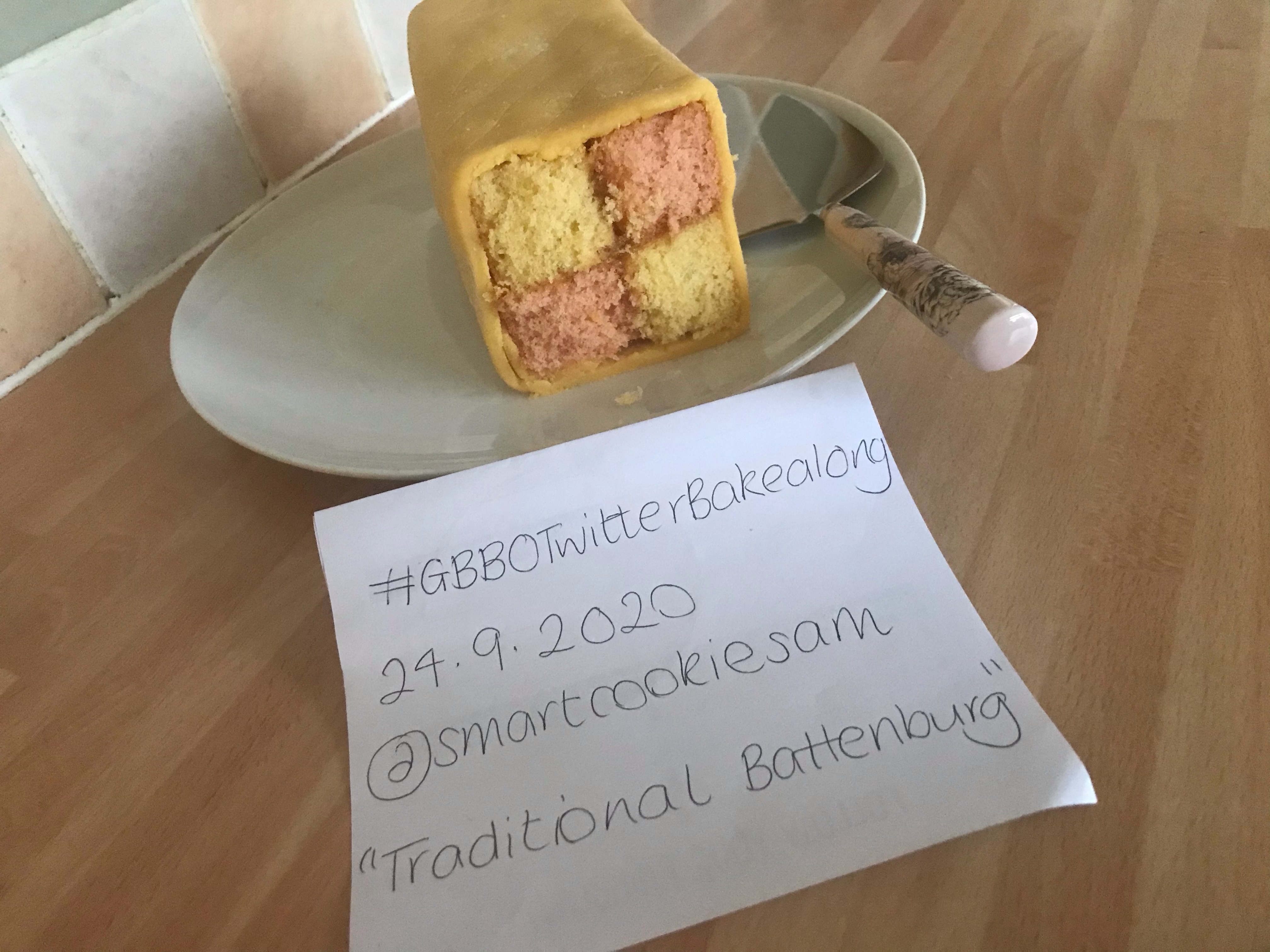 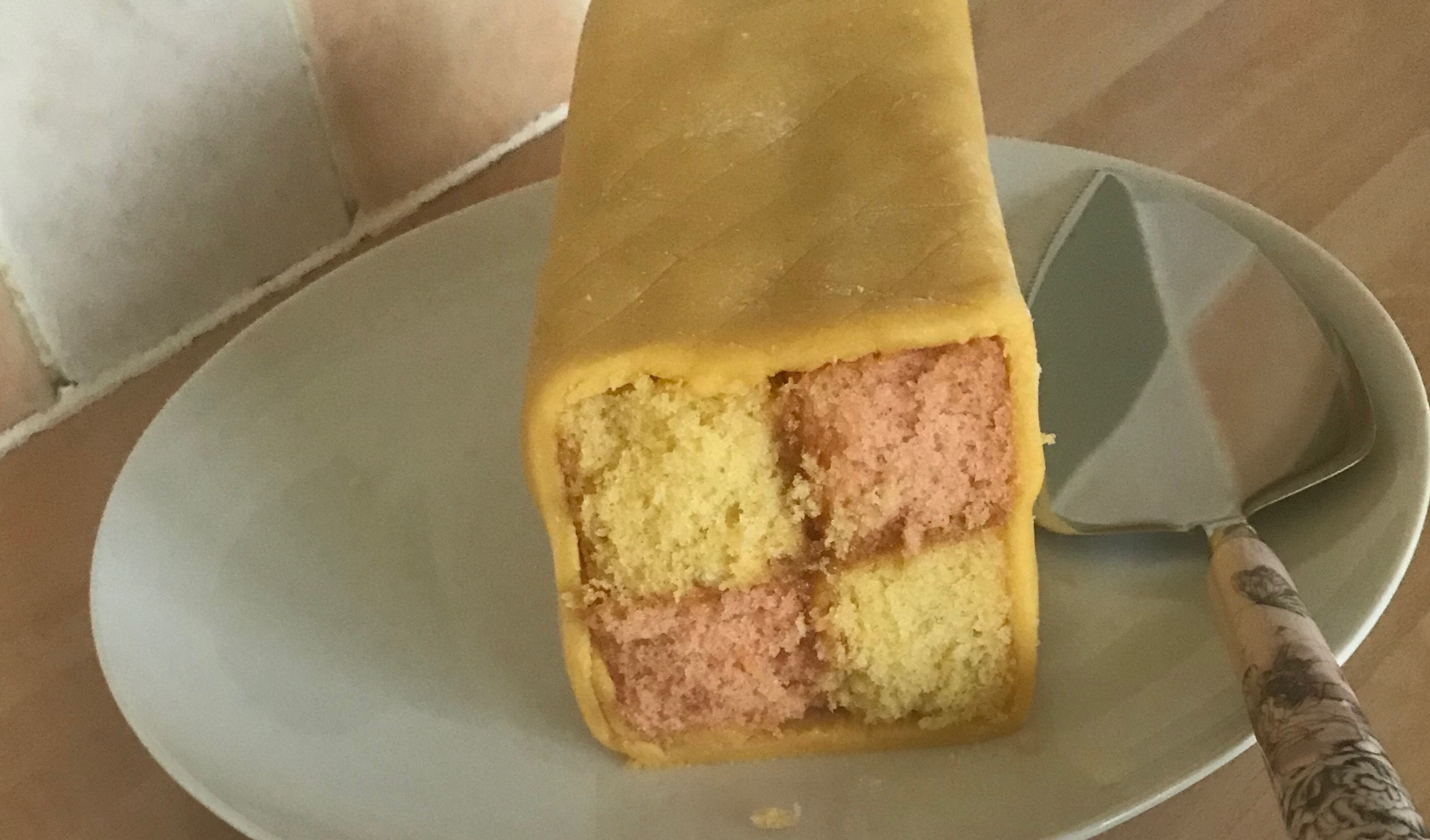 Now for the really fiddly bit and the bit I dread: the marzipan! I rolled out the marzipan and despite putting plenty of icing sugar on the work top and on my rolling pin, it still stuck like glue to the worktop. I got really frustrated and ended up scraping it up and starting again a couple of times.

By the third attempt, I got so annoyed I tipped loads of icing sugar on the worktop but it did work! Nothing stuck after that! I got the marzipan wrapped round the cake and trimmed the ends. 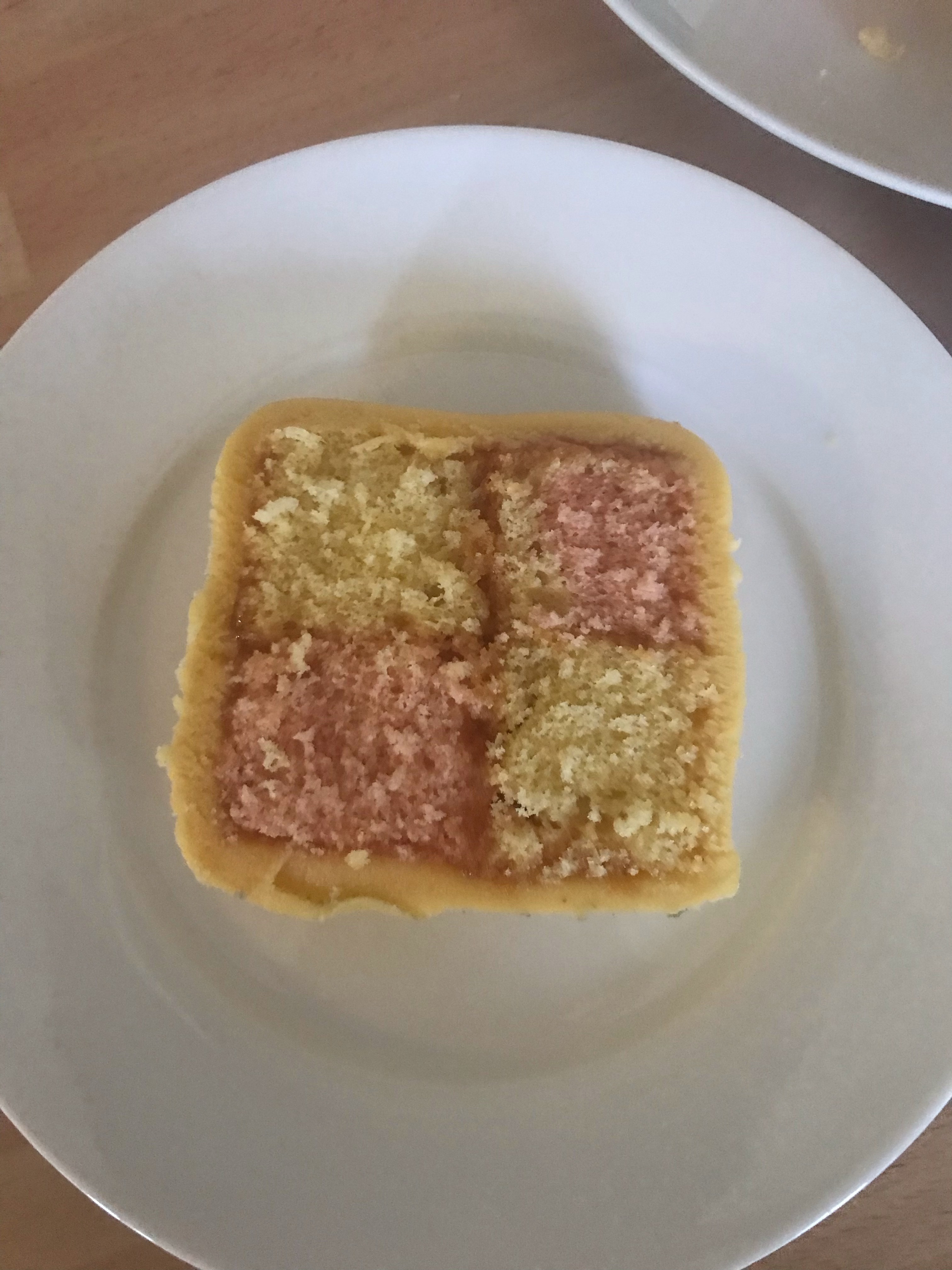 The feeling when it was done after thinking it would be another disaster was so uplifting. I cut off a piece to photograph. Mr S ended up eating it with a cuppa when he got in from work. I didn’t have any as we were going out for dinner.

I will definitely make a Battenburg again but it’s one of those bakes you have to devote a few hours to.