I’ve always loved Pineapple Upside Down Cake. It was a great favourite when I was a child. I hadn’t baked one for a while and had yet to find a recipe I liked and was really happy with. Until now. It was quite by chance that I spotted there was a recipe in the book I’m attempting to bake through at the moment: Amazing Cakes from The Great British Bake Off. Coupled with the Technical Bake from week one in this year’s Bake Off, I was even more keen to have a go!

The caramelised pineapple layer is made so by using golden syrup in the bottom of the cake tin. This gives the gloriously sticky but delicious topping when inverted out of the tin. Other bakes have used brown sugar and butter to create a type of caramel. I really thought the syrup was a great idea and much less of a faff!

I used a 23cm diameter spring form cake tin which is usually my cheesecake tin! I lined and greased it then poured golden syrup on the bottom of the tin. When this was done I arranged the pineapple rings to fit in the base of the tin. Some rings had to be cut to fit in the gaps as well as leaving the circles to adorn with glace cherries. I do think it makes a pretty cake and the pineapple rings remind me of flowers with their red cherry centres.

The cake part was made by creaming together butter and sugar. When the butter and sugar had been creamed for a few minutes, I added in eggs slowly, followed by sifted self raising flour and some baking powder. The batter was very stiff so it needed liquid. To this we needed some milk and vanilla extract. When I looked in my cupboard I realised I didn’t have any vanilla extract left! I needed something to add to it so in the end I used some Monin Coconut sugar syrup which was from a cocktail set I got at Christmas. It’s useful having this set as the syrups are great substitutes for flavour extracts.

Bearing in mind that last Sunday, when I baked the Pineapple Upside Down Cake was a very stressful day, I was actually calmed down by baking. A task on the computer which should have taken half an hour on Sunday morning ended up taking me 5 hours. I was so stressed and wound up. Then the task didn’t work and I had to do it all again on Monday night. But that’s another story. By the time the cake was in the oven it was Sunday dinner time and we were having a sausagemeat puff pastry plait. That was in the oven while I was preparing the cake. The cake had to be in the oven while we were eating.

After the stresses of Sunday afternoon, I was hoping and praying that the cake wouldn’t be a disaster. It was fine! We didn’t eat any for dessert as it was still too hot to eat and too late. So I cut ourselves three slices and saved the rest to take to work for my workmates. I had a piece on Monday night when I got in from work. I am meant to be cutting down on sugar, but I was so tired I needed the energy. It hit the spot! 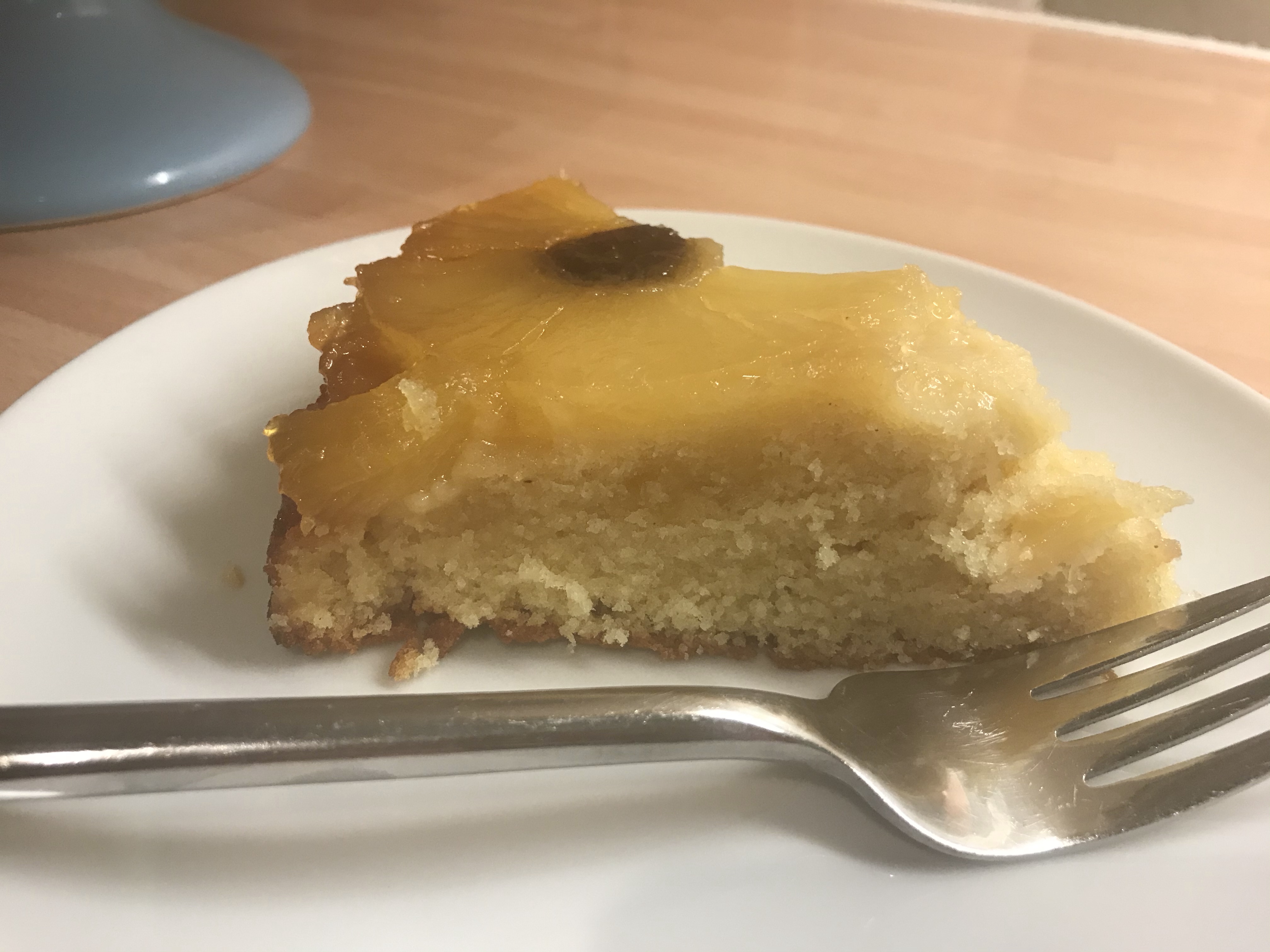 My slice on Monday night. It goes really well with custard, cream or ice cream. I ate mine plain though! 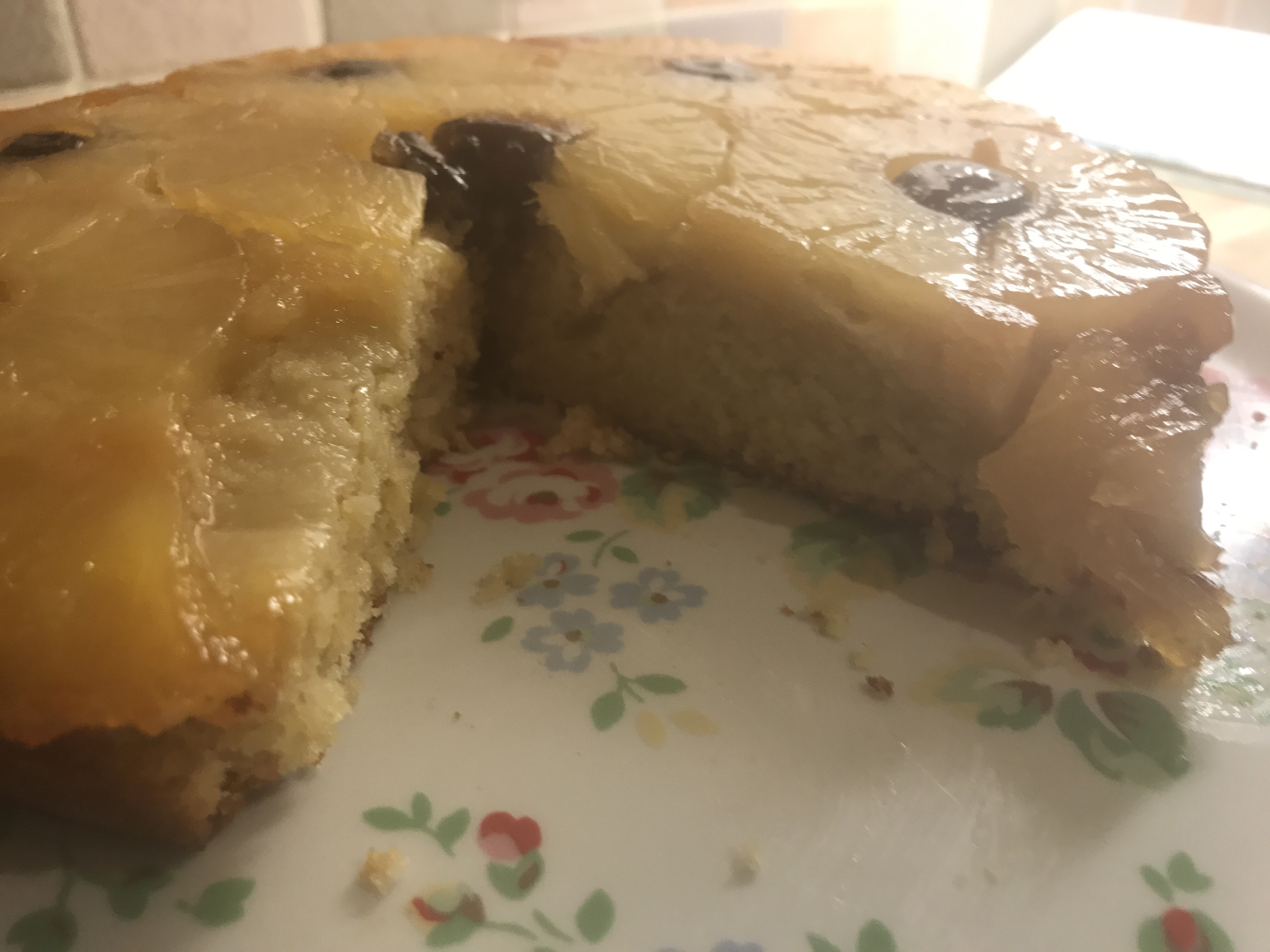 If you would like to try Paul Hollywood’s version, here is the link to it:

One response to “Amazing Cakes #5: Pineapple Upside Down Cake”