I can’t resist a good carrot cake. Neither can the rest of my family and whenever I make carrot cake it disappears very quickly. Last Saturday afternoon I hadn’t planned on doing any baking. But I had done all the housework, been food shopping and came home having bought another bag of carrots. I couldn’t believe it, I’d forgotten I’d bought carrots the other day! The ones I’d bought the other day were beginning to go funny so I thought I’d better do something with them. So I made a batch of carrot soup.

I still had about 4 large carrots left so thought I’d better bake a carrot cake. Every carrot cake recipe I had needed full fat cream cheese in the icing and I had to nick what was left of my daughter’s Philadelphia in the fridge. I chose to bake Amelia Le Bruin’s recipe in Amazing Cakes From The Great British Bake Off. One of the chapters features recipes from last year’s bakers and I remember Amelia’s Naked Christmas Cake. I don’t recall this cake though. This carrot cake actually has chopped apple in it as well as raisins and chopped walnuts. I didn’t have chopped walnuts, only a small bag of mixed nuts which ended up being chopped into the cake instead. As with a traditional carrot cake, the fat content comes from vegetable oil and not butter.

I started by preparing and weighing out the carrots, apple, raisins and nuts. Then I weighed out the dry ingredients into a large mixing bowl, which was some self raising flour, baking powder, cinnamon and ginger. In another bowl I whisked together beaten eggs and oil along with some granulated sugar. These were then folded in with the dry ingredients followed by the carrots and apple, etc. When this was done, I tipped the mixture into the tin. I used a deep filled 20cm diameter deep filled tin. This carrot and apple cake was a single layer one. Normally the ones I make are double ones.

A raw carrot cake batter unfortunately doesn’t look very nice but I assure you it looked much better once baked! I put the cake in the oven to bake and carried on with my other jobs.

While the cake was cooling, I made up the cream cheese frosting. I have learned over the years that it is not a good idea to use low fat cream cheese for frosting. It is not the same and makes the frosting so runny. There was an added ingredient in Amelia’s frosting: double cream! This gave the frosting a delicious flavour and made it thick and glossy. It was so easy to spread onto the top of the cake and there was lots of it!

To finish, Amelia’s recipe had chopped walnuts on top of it as is traditional on a carrot cake. I must admit I prefer marzipan or sugar carrots on mine and the ones I use are ones I buy in packs of 12 from my local supermarket. They also help me with portioning out the carrot cakeWe had a piece of carrot cake that afternoon with a cup of tea and then I saved the rest to put in a box to take along to work to share with my work mates. Mr S and my daughter were looking to find the rest of the cake on Monday afternoon and wondered where it had gone. Trouble is if I usually make something they say to me why have you baked that, we don’t need it! Then when I don’t bake, they want me to make something! I can’t win! 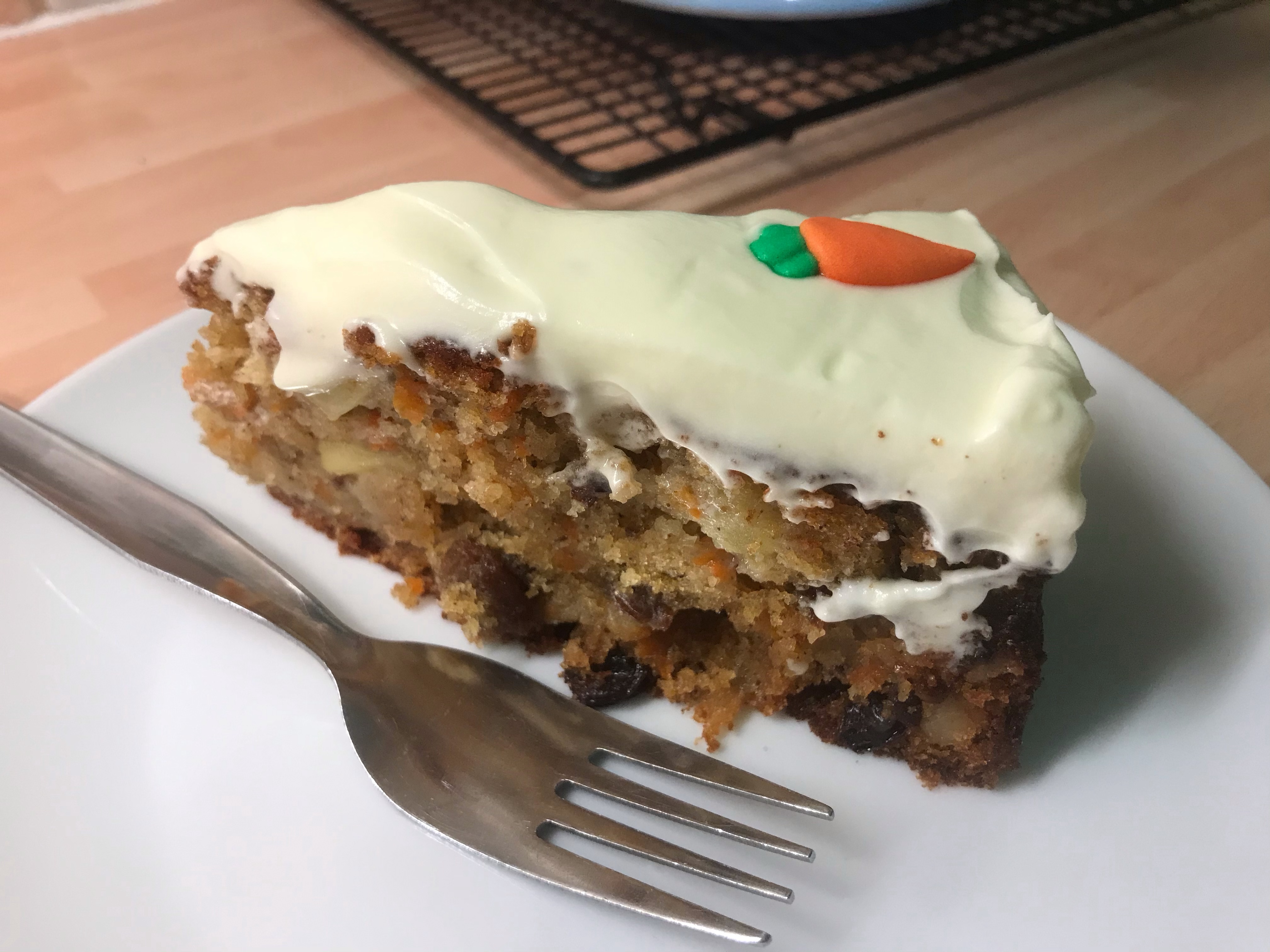