It’s been a busy week here, not had much chance for actual baking as I’m getting my website ready for my online cookie business! All will be revealed by next week. I’m waiting for some new packaging to arrive so I can send out cookie samples to my taste testers. I’m also rethinking a couple of recipes so that they will leave my kitchen looking perfect.

I’m also a supply teacher working in primary schools in my area and work has been a bit quieter this week what with home learning for some and the pandemic issues. I have been grateful for this week being a bit quieter though as it has given me time to focus on jobs at home, my new business and to have some wintry walks out with my dog. On Wednesday afternoon, though I was wanting to bake something other than cookies. This is where my Big Book Of Amazing Cakes Challenge has been enjoyable and it’s nice to bake something different.

Looking through the book I wanted to make something quick, easy and that needed to use up ingredients I had at home. It was a toss up between the Pecan and Banana Loaf to use up very ripe bananas or the Vegan Lemon Drizzle Loaf. My daughter came downstairs to put the kettle on between her online uni lectures and said “Urgh no, not banana cake with nuts in!”, although it wouldn’t have had pecans in anyway. I didn’t have any in, only walnuts! She was really keen on the idea of the lemon cake as she loves lemon drizzle and although she is not fully vegan, she does have lactose intolerance.

So, the Vegan Lemon Drizzle it was! I have never made a Vegan Lemon cake before and oh my it was so worth it. It was different to some of the loaf cakes I have made before in that it came out with a flat top and not a curved one. To substitute butter and eggs, the replacements are with soya milk, apple cider vinegar and non-dairy spread. We use oat milk in our house so I hoped that would work as well. It did in the other vegan cake I baked recently, the Vegan Marble Bundt Cake. I nicked some of my daughter’s non-dairy spread and we were ready! This recipe is versatile because not only did it give quantities for the small loaf I baked but also for other size bakes including a square tin and a traybake size.

To start with I measured out the oat milk into a jug and mixed in a tablespoonful of apple cider vinegar. This had to be left for a few minutes to curdle. It looked and smelled horribly sour!

In the meantime I creamed together some caster sugar ,the non dairy spread and the zest of a large lemon. I then added a spoonful of vanilla extract to it. Then the smelly oat milk mixture was added to the creamed mixture. This looked horrible and I was worried about the curdling effect. But as soon as I added self raising flour, baking powder and ground almonds to the mixture, this sorted the problem out. I kept the rest of the lemon aside as this was going to be used in the drizzle and the icing.

The loaf cake baked in the oven at about 160oC for just under an hour and came out after I poked a skewer in it. It came out clean so the cake came out and was put on a wire rack still in its tin to cool down. After a few minutes I made up a quick lemon sugar syrup which was poked into the cake with a cocktail stick. Usually when I make lemon drizzle cake that’s all I put on top of the cake and there’s more of it so it crystallises on the top. This was the case with the first recipe from my challenge the Lemon Drizzle Traybake. Instead, this recipe also has a fondant icing on top.

Later on, I mixed up some icing sugar and lemon juice and spread it carefully on top of the cake. As shown in the recipe picture it was designed to drip down the side and not to look perfect. If you wanted you could add some edible flowers and decorations. I had some jelly lemon slices but I’m not sure if they are vegan or not. I bought them from Lakeland in a little pot and it didn’t say not suitable for vegans on the ingredients. 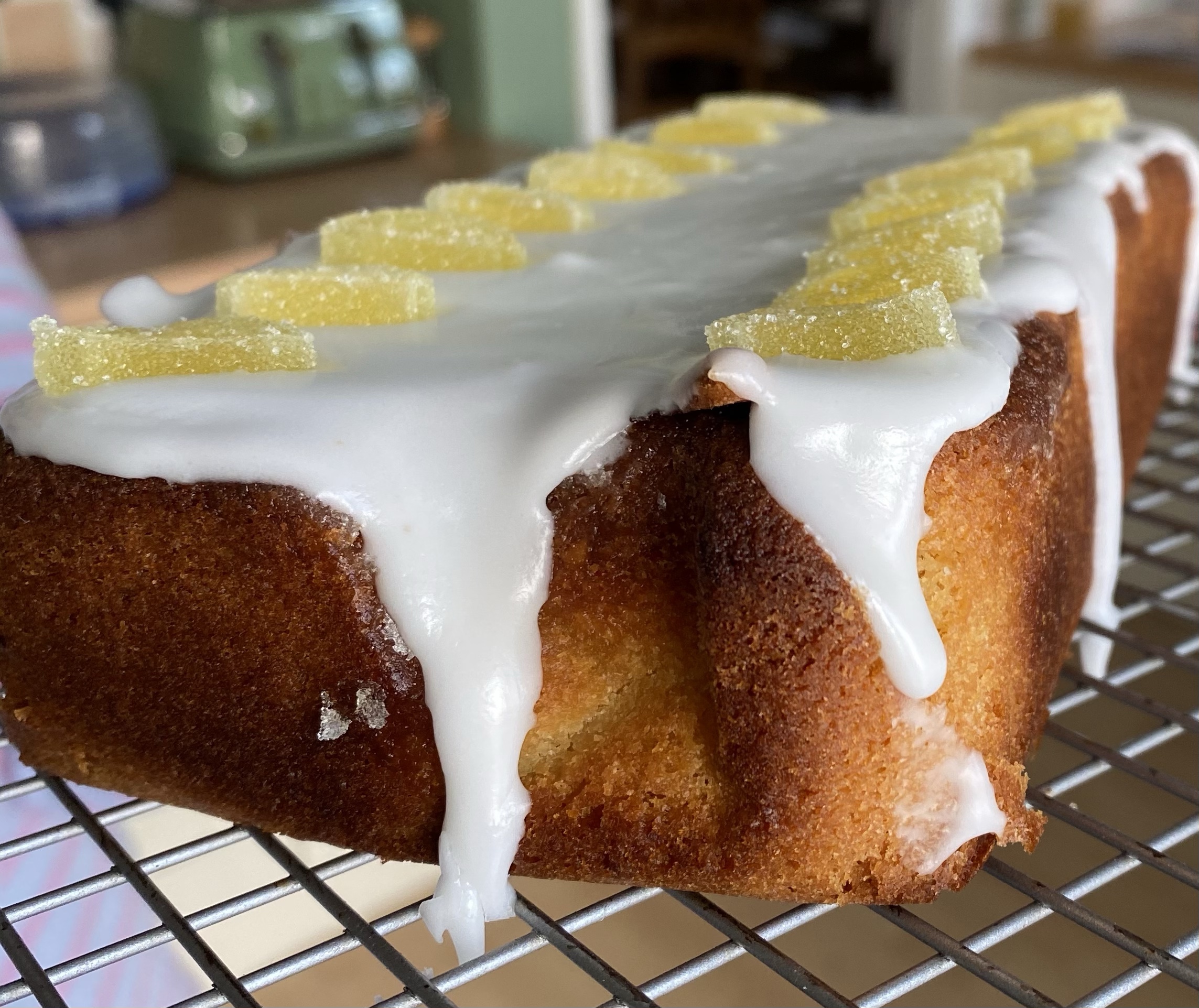 My daughter and I couldn’t wait to have a piece and the icing was still runny when we cut the cake. But it was delicious and I can definitely recommend the recipe. Another one on my getting increasingly longer shortlist to bake again!